Study Shows Marijuana Use Rising Among Seniors Over 65

In a study by the Journal Of The American Geriatrics Society, of the 568 Patients in the study, 15% had used cannabis or marijuana in the past three years. And half were using cannabis on a regular basis, usually for ‘medical’ purposes.

Christopher Kaufmann, co-first author of the study and assistant professor in the Division of Geriatrics and Gerontology in the Department of Medicine at UC San Diego said “Pain, insomnia and anxiety were the most common reasons for cannabis use and, for the most part, patients reported that cannabis was helping to address these issues, especially with insomnia and pain,” And the study showed that 61% of the subjects did not begin using cannabis until after age 60 for any reason.

The researchers said they expect to see more older adults turning to cannabis or cannabis-based products. And they recommended more studies to better understand how different formulations of cannabis could treat older adults. Kaufmann said, “There seems to be potential with cannabis, but we need more evidence-based research. We want to find out how cannabis compares to current medications available". And Kaufmann added, "Could cannabis be a safer alternative to treatments, such as opioids and benzodiazepines? Could cannabis help reduce the simultaneous use of multiple medications in older persons? We want to find out which conditions cannabis is most effective in treating. Only then can we better counsel older adults on cannabis use.” 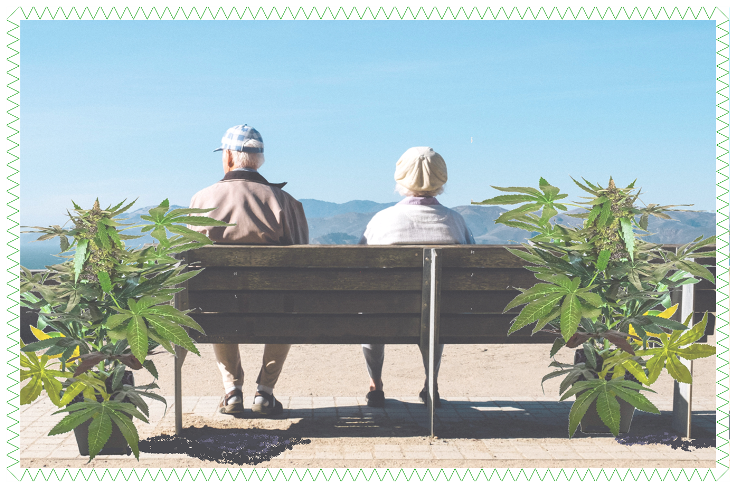 The researchers said they expect to see more older adults turning to cannabis or cannabis-based products in the future.

For whatever reasons more and more seniors are using marijuana. The JAMA Internal Medicine website has reported on the extent of the increase. It highlights a new study saying the number of Americans age 65 and older who smoke marijuana or enjoy edibles increased 75% from 2015 to 2018.

Researchers at New York University School of Medicine analyzed data from the 2015-2018 National Survey on Drug Use and Health. They found cannabis use among the 14,896 respondents 65 and older increased from 2.4% to 4.2%. Cannabis use was determined by asking about marijuana, hashish, pot, grass and hash oil use, either smoked or ingested.

The analysis also found a 180% relative increase in marijuana use among older Americans with diabetes.

Are There Risks For Seniors Using Marijuana?

Researchers recommend more studies of the use of cannabis among seniors to better understand how different formulations of cannabis could treat older adults, “both to maximize benefits and minimize harm.” However at this time, doctors and public health experts can’t promise older adults that marijuana is safe or effective.
Dr. Gretchen Orosz, an internal medicine doctor with a specialty in geriatrics. She says about the safety of marijuana use, “It’s a big unknown. We just don’t have studies that support the use,” and, “We know that THC (tetrahydrocannabinoal) is psychoactive and the aging brain is more vulnerable to psychoactive drugs. So we tell our patients that they have to be very careful when using THC.”
Mike Van Dyke is the Chief of Toxicology for the Colorado Department of Public Health and Environment and like many doctors, public health experts he also has concerns about safety. “There are definitely some adverse effects of marijuana and the adverse effects in older adults are under-studied,” Van Dyke said. “We don’t know a lot about how marijuana use might increase risks for falls and balance problems. There are also concerns about people with pre-existing cardiovascular conditions. It just hasn’t been studied enough.”
Older adults, in general, have a slower metabolism and that means that it can take their bodies longer to process and excrete all drugs, including marijuana. Is there a risks for seniors using marijuana for the above reasons? More information is needed.